The Economic Benefits of Oil and Gas

“Mid-year 2014 combined hydrocarbon (all forms of petroleum) exports of 4.5 million barrels a day pushed total oil exports to the top of the list of U.S. exports by category, far surpassing all agricultural products, capital goods and even aircraft as the largest sector of U.S. export trade.” - from The Rapid Rise of the United States as a Global Energy Superpower, 11/4/2014, Citi

The United States has gone from being the largest importer of oil and gas in the world to having a net surplus. It is now the largest exporter of liquefied natural gas and liquefied petroleum gas. This transformation is nothing short of astounding and is a direct outcome of American ingenuity, technology and the entrepreneurial spirit. Not only does this shift alter the economic landscape for exports, it also means that all American industry using natural gas or natural gas liquids are now operating from a huge competitive advantage in the global market.

The report goes on to state, “When it comes to crude oil and other hydrocarbons, the U.S. is bursting at the seams. This situation is unlikely to stop even if prevailing prices for oil fall significantly – Citi anticipates that even if West Texas Intermediate (WTI) prices fell below $75 for a while, production growth would continue at relatively high levels for years to come.”

In California the oil and gas industry is responsible for nearly seven percent of the state’s GDP and employs more than 800,000 people (API). The majority of this production is in Central and SouthernCalifornia. This is incredibly impressive when you consider that some of these oil and gas fields have been producing for over a hundred years. Modern operators work to increase production from existing wells by analyzing geologic, technical and economic data, and by implementing advanced downhole technologies.

No one will argue with the statement that California has the strongest environmental laws in the nation. The state leads the country in lowering emissions and protecting natural resources. Producing oil and natural gas in California’s strict regulatory environment is better for the environment and the economy. Endeavors like Termo’s Aliso Canyon Project directly contribute to California’s growing energy independence by reducing the need for imported oil. 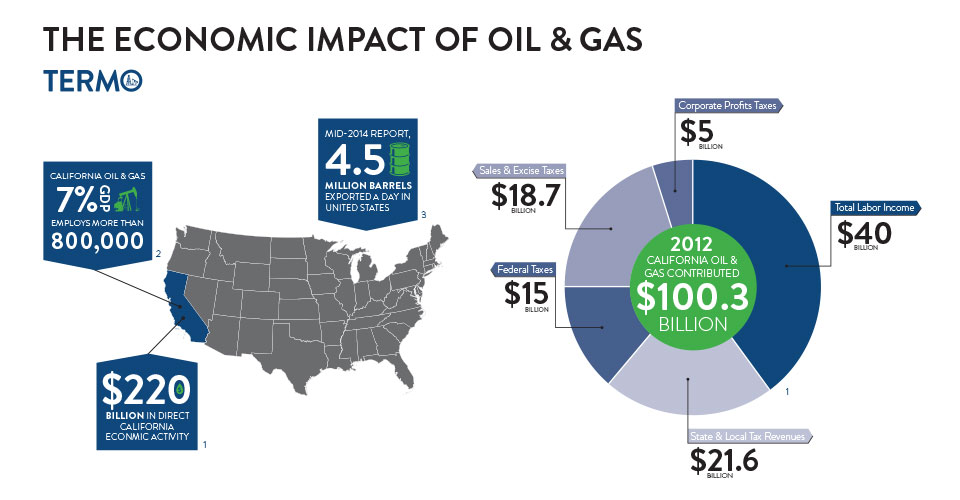 An April 2014 study by the Economic and Policy Analysis Group of the Los Angeles County Economic Development Corp. shows that the oil and gas industry accounted for 2.3 percent of all employment in the state. And, in 2012, Oil and gas contributed more than $220 billion in direct economic activity in California.

In 2012 the industry also accounted for:

The economic benefits of oil and gas are clear. The United States has been able to come out of the recent economic downturn through energy independence and market dominance. With over eighty years of exploration and development, Termo is proud to contribute domestic crude oil and natural gas as a part of this new American economic revival.