The Difference Between Traditional Drilling and Hydraulic Fracturing

Every stage of an oil and gas well goes through an extensive process of planning. Engineers must approve plans that include the protection of surface and underground environments throughout the process of planning, drilling, completion, production and restoration. When drilling begins, a universal method is used where drilling is done at intervals and steel pipe called casing is inserted into the wellbore. The casing is set in place with cement which acts a protective layer. These layers of casing and cement are run into the well one joint at a time to isolate oil, gas and water zones from the wellbore, creating an airtight seal. Once the drill bit has reached the targeted zone is where the differences in traditional drilling and the process of hydraulic fracturing begins. 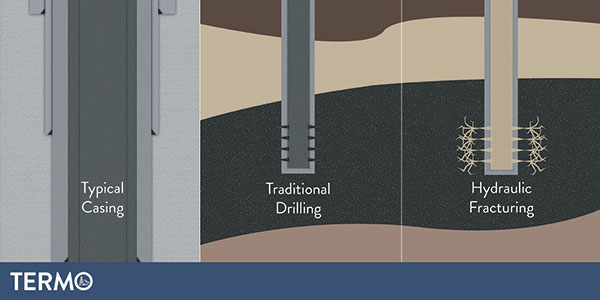 Traditional oil wells use conventional drilling techniques and are drilled vertically to reach reservoirs of oil and gas. Once the drilling is completed and has reached the targeted zone the well casing is then perforated. Perforating the casing opens up the targeted zone and surrounding area. A traditional well is only able to access the oil and natural gas in the immediately surrounding area at the end of the well.

Wells that intend to use the process of hydraulic fracturing start off with the same drilling process that all wells use as previously mentioned, and a well that will be hydraulically fractured can be drilled vertically or horizontally. Once the targeted zone is reached the well is perforated and now the process known as hydraulic fracturing begins. Hydraulic fracturing is a 1-3 day process where high-pressure fluids are pumped down the well into the rock formation under high pressure. Fracturing fluid is generally comprised of 90% water, 9.51% sand and .49% chemicals. The fluid expands within the perforations causing it to open up or fracture the rock which allows the tightly packed oil and gas to be released from the porous rock. Hydraulic fracturing can expand from approximately 100 to 2,000 feet horizontally to capture oil and gas within each layer or zone that is fractured. Traditional oil wells do not use this process. The composition of the layers of rock and the geographic location are a few of the deciding factors that determine what type of drilling is required and if there is a need for the well to be hydraulically fractured. Economic conditions and supply and demand ultimately determines how many wells are drilled.